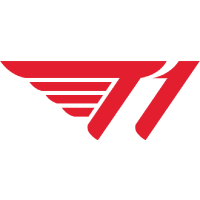 Finally, to close out the first Group Stage round robin, we have T1 taking on 100 Thieves — a most peculiar match-up, no doubt, but also one that could potentially yield a lot more entertainment than you'd ever expect. Everyone's leaning towards T1 (obviously), but 100 Thieves definitely have a puncher's chance, especially if they draft well and play their hearts out. They're not expected to win, of course, but they're nonetheless well-equipped to trade blows with this venerable Korean giant.

Both teams are currently tied for second place with one win apiece, and both had pretty much demolished DetonatioN FocusMe to get to where they are. EDward Gaming, however, proved to be too big a challenge, so they're basically fighting against each other for a shot at getting out of groups. That's the most important thing right now, and getting a win here tonight would go a long way towards making that hope a reality. Heck, one could argue that it would all but guarantee the victor a spot in the Top 8.

So, needless to say, both line-ups will surely tryhard beyond measure. Their legacies aren't the only thing that's at stake — reaching the Knockout Stage will automatically increase their earnings, so there's a two-fold benefit at play. T1, of course, have done a whole lot more thus far and have looked a fair bit better, too. More cohesive, decisive, and at ease with the current meta. They still made a handful of mistakes against EDG, but we still saw glimpses of greatness so they should be considered as a shoo-in to make it out almost by default.

100 Thieves, to their credit, improved quite a bit, and had made quick work of the LJL champions yesterday. Then again, we really shouldn't look too much into their dominant win as it did, after all, come at the expect of DetonatioN FocusMe — anything other than a one-sided beatdown would've been a debacle. So, we know that 100 Thieves can pack a punch, but we're still hesitant to give them our benefit of the doubt and, well, will good reason. They're just not consistent enough to compete with the all-time greats, and even though this particular incarnation of T1 isn't as potent and dangerous as those of yore, it's still stacked with talent and mechanical prowess and will no doubt emerge victorious — barring any mind-blowing twist.

Still, 100 Thieves have the potential to upset, and with T1 being far from infallible, there's an ever so slight chance of an upset here. It's not much, really, but at least it exists. Regardless, a faint prospect of it happening simply isn't enough to sway us towards the LCS champions.