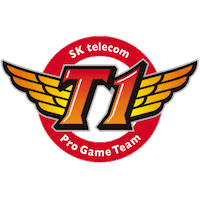 For our first match of the Group Stage, we have an absolute spectacle. Perhaps that's even an understatement. A clash between the best, most storied and feared LCK team in history -- which also happens to be the best and most successful team in League's history -- against a team that is synonymous with the European region. Which, much like SKT, is one of the most eminent and respected teams in the world of competitive League.

Talk about an opener!

This is an absolute must watch regardless of the way you approach it. A fight between two exceptional titans; a clash between two teams of unparalleled strength. These two teams have the biggest fan bases, and some of the best players to ever grace the stage.

They can play slowly and focus on the strategic side of things, or they can throw caution out the window and just fight non-stop. That's why we love them, and that's why you should mark your calendars.

Now, there are two big questions at hand: who's favored to win, and why? Obviously, the first one points to SKT due to logical reasons. They come from one of the best regions in the world, they've maintained an incredible level of play throughout the year, they showed more than enough to warrant everyone's full benefit of the doubt, and many people are considering them as the front-runners to win the whole tournament, even though they lost to G2 Esports in a spectacular Best of 5 back at the most recent Mid-Season Invitational.

They're that good, and everyone knows it. And they've only been getting better and better as time went on. Their synergy and preparation are second-to-none, and they've adapted to the current unhinged, hectic skirmish-heavy meta. The fact that they can still play in a more subdued, macro-oriented way only makes them scarier; they have more tools to work with and they can pick and choose how they want to dissect and outclass their opponents.

But Fnatic aren't a pushover either. They didn't exactly blow our minds throughout 2019 primarily because they were painfully inconsistent. They dominate beyond comprehension for two or three weeks, then they implode for unknown reasons, and then improve just in the nick of time. The last we've seen of them was absolute, resounding domination, but we can't know for certain whether or not that kind of momentum and level of play are still valid at this point in time.

They deserve our benefit of the doubt, but the fact that they haven't been that flexible over the last couple of months still lingers in everyone's mind. Now sure, when they get their hands on comfort picks they can trade blows with anyone in the world. But they're easy to ban out, and they're fairly telegraphed in the pick and ban phase. Did they adapt? Did they diversify their arsenal? One can only hope that's the case but until we see it in action, we should be reserved.

In the end, we have to side with SKT T1. There's no reason to do otherwise, and although Fnatic looked amazing in the 2019 LEC Summer Split playoffs, it's hard to envision them taking SKT down. That said, the former "kings of Europe" definitely have all the right tools at their disposal in order to get the win, and should they manage to get the upset no one will be overly surprised. Heck, it's not even an upset at this point as they're coming from the strongest region in the world, and were one game away from taking G2 Esports down -- twice in a row.

They might not be the most dangerous team at this point in time, but they're definitely a titan of competitive League and have the potential to accomplish great things. How well they'll perform remains to be seen, but one thing is for certain: they're going to fight for every inch of the Summoner's Rift against SKT T1, and you do not want to miss out on any of the action.