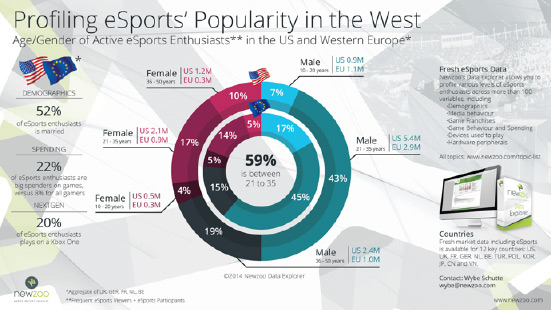 E-Sports Demographics: Who Plays What, and Where?

The esports community is growing at a ridiculous rate. Gamers everywhere are embracing it, swarming to tournaments like moths to a flame. Viewers are tuning in also, making esports one of the most viewed sports out there. You might assume that the vast majority of hardcore gamers are single teenage boys and middle-aged men living in their parents’ basement. This is not the reality of esports. In fact, the demographics of esports are becoming more and more diverse all the time.

When thinking of the sheer number of participants in the esports community, you have to consider a few things. First off, who is playing these games? How many men and women? How old are they? Do they have kids? What games are they playing? Which countries have the most esports participants? On the other end, who is watching? How many people are watching? What are they watching? Esports has grown into something big enough to bet on, like poker or any other game, and something big enough to award large sums of prize money to the winning teams. So who is betting? Where is this phenomenon most popular? Here are some numbers that will provide some insight and put into perspective just how large this community has become. We have a lot of ground to cover, so get ready.

Perhaps unsurprisingly, there is a clear majority of males in the esports community. When specifically looking at the most popular esports games, including League of Legends, Dota 2, and Counter-Strike: Global Offensive, statistics from EEDAR show that about 64% of the players are male. That is almost two thirds. However, these numbers are changing almost as fast as esports is growing. In fact, Oxent, a French esports company, is working hard to create a much larger female population in esports. But, the company will have a lot to overcome to achieve their goal. Just like in many other sports, women’s teams are frequently pushed aside and given less exposure (and pay) than men’s teams, despite being equally skilled. Female gamers in general also face a hostile environment from many that is only amplified by being in the public eye.

What about the fans?

Esports wouldn’t be anything close to what it is today if it weren’t for the millions of fans who follow these games, tournaments, and teams. Any avid gamer knows that there is a lot of value in watching other players to improve their own gameplay, but actually, most viewers watch simply to witness top-tier gaming at its finest. Gamers and gaming fans alike tune in to Twitch to watch elite gamers show their skills, and ultimately demonstrate how much room there is for glory and mastery in esports. So who is watching?

A report from Eventbrite stated that, in overall esports viewership at events, a whopping 82% of players were male. A little over half (52%) were from the U.S., while the other 48% were from Europe. That’s 18% from Germany, 18% from the U.K., and the remaining 8% from various other European countries. 75% of these viewers were between the ages of 18 and 34, and 44% were college students. That’s a pretty wide range, even compared to other sports.

Who plays what, where?

So, what are the biggest esports titles, and where are they played the most? These numbers are kind of hard to find, so here’s just an idea. For the sake of brevity, we will focus on four of the biggest games in esports:

In terms of prize money earned, League of Legends sees most of its activity in Korea, China, and Taiwan, awarding over $15 million in prizes. As the most played competitive game by far, League of Legends has over 1.4 million players daily.

According to Steam, Russia has the most Dota 2 players, followed by the United States. Next is China, and then Brazil, and the rest are far behind.

Counter-Strike: Global Offensive (CS:GO) is played mostly in the U.S., followed by Russia, then Germany.

Starcraft II is absolutely huge in Korea. It is even jokingly called Korea’s national sport. It isn’t (officially), but it’s close. Starcraft II is an actual career in Korea. I became aware of the level of the game’s popularity when a friend of mine said he wanted to move to Korea and become a Starcraft II announcer.

Esports are quickly carving out a global place for themselves as a viable and lucrative sport for gamers. The prize money being awarded certainly shows how seriously it’s being taken. It is becoming a highly aspirational career, with kids and young adults today being just as likely to dream of becoming a League of Legends star as a star baseball player. Soon, posters of ZerO may start appearing on bedroom walls were posters of Michael Jordan and Derek Jeter once hung.